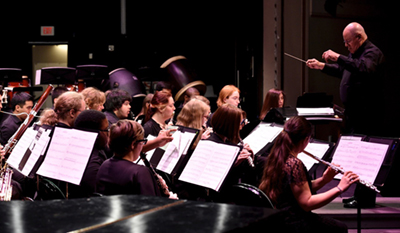 The recording is protected by copyright and/or related rights. You are free to listen only.

Rickey H. Badua is the Director of Bands and Instrumental Music at California State Polytechnic University, Pomona, CA, where he conducts the Wind Ensemble, Concert Band. He teaches beginning and instrumental conducting and oversees all aspects of the instrumental music program. Prior to his appointment at California State Polytechnic University, Pomona, Dr. Badua received his Doctor of Musical Arts in Wind Conducting from the University of Georgia where he studied with Dr. John P. Lynch. His dissertation titled “The Maverick: An Analytical Study of Carter Pann’s Symphony for Winds: My Brother’s Brain (2014)” investigates the wind-band music of Pulitzer-finalist and Grammy-nominated composer Carter Pann through an extensive study of his most prodigious work for large ensemble. Dr. Badua was also the recipient of the Director’s Excellence and Outstanding Graduate Teaching Assistant award. ...

Shiree Williams is the Director of Bands at Faubion Middle School in McKinney, Texas. Formerly, he was an Associate Director of Bands at McKinney High School for two years, where he conducted the Concert Band and Jazz Band. Mr. Williams holds a Bachelor of Music in Music Education degree cum laude from Valdosta State University, and a Master of Music in Conducting (Wind Emphasis) degree from the University of Cincinnati College-Conservatory of Music where he was the conducting student of Glenn Price, with additional mentoring from Angela Holt. Mr. Williams receives the opportunity to teach and conduct in many settings, and is a frequent guest clinician of concert and marching bands, and has guest conducted various middle school, high school, collegiate, and professional ensembles. Some of Mr. Williams’s professional organizations include: Alpha Phi Alpha Fraternity Incorporated, Kappa Kappa Psi National Honorary Band Fraternity, the National Band Association, College Band Directors National Association, World Association of Bands and Wind Ensembles, Texas Music Educators Association, and the National Association for Music Educators.