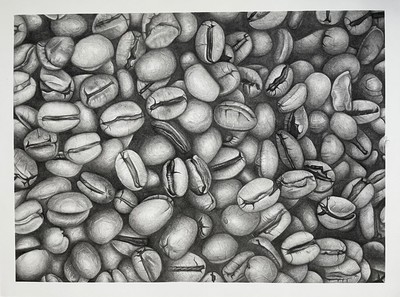 My charcoal series titled Grounded delves into the process of grounding methods used during an anxiety or panic attack. By locating five things one can hear, four things one can feel, three things one can see, two things one can smell and one thing that one can taste, the sufferer essentially “grounds” herself to her environment. In these confusing and trying times, I often find myself using this method. In this series I chose to depict compositions of things I have personally heard, felt, seen, smelled, or tasted when using the Grounding method. For the first step, one thing you can hear, a wave is depicted cresting, as I often listen to a recording of waves to promote relaxation. For the second step, four things you can feel, wet fabric clinging to a torso depicts the feeling of claustrophobia during an anxiety attack. For the third step, three things you can see, I chose to draw a composition of foliage, which I have dotted throughout my bedroom and studio. Two things you can smell is depicted by a close-up view of a flower, as I use essential oils to help cope with anxiety. The final step, one thing you can taste, is represented by an abundance of coffee beans as I am always drinking coffee. Working in charcoal, my black and white compositions can be described as soft, yet detailed. In my layering I attempt to convey detail and to capture emotion.