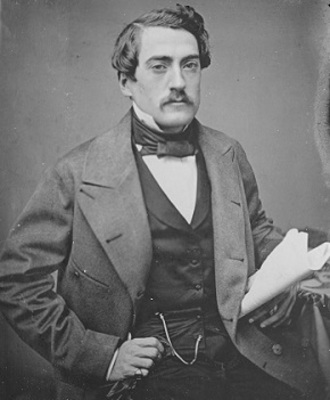 John Reuben Thompson was born in Richmond, Virginia, in 1823. He graduated in law from the University of Virginia in 1845.

Thompson did not pursue a career in the legal field but instead dedicated himself to journalism and editorship. In 1847, he became the editor of the Southern Literary Messenger in Richmond, and in 1859 editor of The Southern Field and Fireside in Augusta, Georgia. Thompson did not take part in the Civil War due to health reasons. Instead, he went to London, from where he supported the Confederacy by writing articles in English magazines.

In 1866 he became editor of the New York Evening Post, a position that he maintained until his death in New York in 1873. Thompson was also a poet, most of his works being war poems. He has two published works, Genius and Character of Edgar Allan Poe and Poems of John R. Thompson.

During his career and travels, Thompson had the chance to work closely with Edgar Allan Poe, and many notable Southern authors, such as William Gilmore Simms, Henry Timrod, Paul Hamilton Hayne and Philip Pendleton Cooke, as well as European authors.