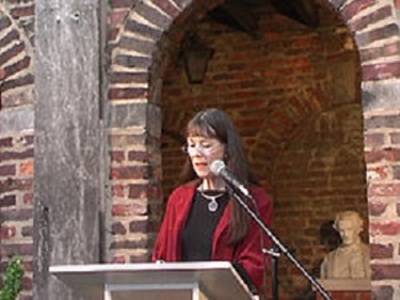 Carolyn Kreiter-Foronda served as Poet Laureate of Virginia from 2006-2008. She holds a B.A. from the University of Mary Washington and M.Ed., M.A., and PhD degrees from George Mason University, where she received the university’s first doctorate, an Outstanding Academic Achievement, and Service Award, and a Letter of Recognition for Quality Research from the Virginia Educational Research Association for her dissertation, Gathering Light: A Poet's Approach to Poetry Analysis. In 2007 both universities gave her the Alumna of the Year Award.

She has co-edited three anthologies and published seven books of poetry, including The Embrace: Diego Rivera and Frida Kahlo, winner of the 2014 Art in Literature: Mary Lynn Kotz Award. She is the recipient of a Council for Basic Education Fellowship, three Artist-in-Education grants, and an Arts-on-the-Road grant from the Virginia Commission for the Arts and has won the Ellen Anderson Award, a Virginia Cultural Laureate Award, a Phoebe first-place award, a Spree first-place award, multiple first-place awards from the Chesapeake Bay Branch of the National League of American Pen Women, Honored Poet ("Art on the Half Shell," Middlesex Art Guild), Master Poet (Arlington Arts Center), a resolution of appreciation from the Virginia Board of Education for her service as poet laureate, an Edgar Allan Poe Poetry Award, six Pushcart Prize nominations, among others. Her poems appear in numerous magazines and anthologies, including Nimrod International Journal, Prairie Schooner, Mid-American Review, Best of Literary Journals, Anthology of Magazine Verse & Yearbook of American Poetry, Blood to Remember: American Poets on the Holocaust, Hispanic Culture Review, Poet Lore, Antioch Review, Passages North, and World Poetry Yearbook.

Her poems, along with those of other Virginia poets laureates, are featured in two art installations at the McLean Metro Station in Northern Virginia. An abstract artist, Dr. Kreiter-Foronda’s paintings and sculptures have been exhibited widely throughout the state of Virginia.