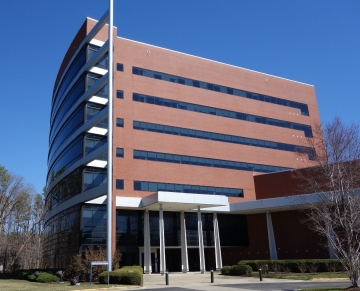 Two-dimensional (2D) van der Waals (vdW) superstructures, or vdW solids, are formed by the precise restacking of 2D nanosheet lattices, which can lead to unique physical and electronic properties that are not available in the parent nanosheets. Moiré patterns formed by the crystalline mismatch between adjacent nanosheets are the most direct features for vdW superstructures under microscopic imaging. In this article, transmission electron microscopy (TEM) observation of hexagonal Moiré patterns with unusually large micrometer-sized lateral areas (up to similar to 1μm2 and periodicities (up to similar to 50 nm) from restacking of liquid exfoliated hexagonal boron nitride nanosheets (BNNSs) is reported. This observation was attributed to the long range crystallinity and the contaminant-free surfaces of these chemically inert nanosheets. Parallel-line-like Moire fringes with similarly large periodicities were also observed. The simulations and experiments unambiguously revealed that the hexagonal patterns and the parallel fringes originated from the same rotationally mismatched vdW stacking of BNNSs and can be inter-converted by simply tilting the TEM specimen following designated directions. This finding may pave the way for further structural decoding of other 2D vdW superstructure systems with more complex Moire images.

This work is licensed under a Creative Commons Attribution 4.0 International License.