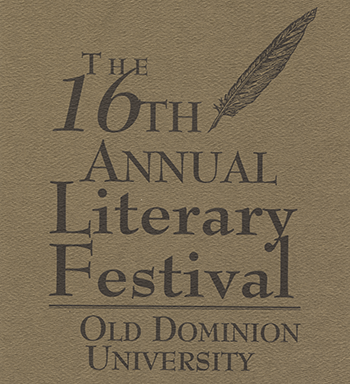 Two American Academy and Institute of Arts and Letters Achievement Awards, The Pulitzer Prize, the National book Award, The John C. Zacharis First Book Award, The Western States Book Award, The Washington D.C. Mayor’s Art Award for Literature, The Virginia Poetry Prize, The Prix de Rome, The American Book Award, a New York Times Notable Book of the Year, fellowships from the National Endowment for the Arts, from the Guggenheim Foundation, and on, and on. As we all know, there is no substitute for quality in writing, whether that quality be in the short stories or creative nonfiction of emerging writers or in the fiction and poetry of writers who have, for many years, tested the durability of their talents. Old Dominion University’s 16th Annual Literary Festival celebrates the very diversity voices of eleven award-winning writers, all of whom share an abiding fascination with the power of language to make us feel.

In the past, the Directors of ODU’s Literary Festivals have always tried to make the Festival readings and performances as open as possible, not only to the university community, but to everyone in Hampton Roads. The Festival is especially lucky this year, though, in the efforts of members of Associated Writing Programs and the Chrysler Museum staff, who have organized a program called “Words Up: Poets at the Chrysler,” a pilot that, by sending fifteen to eighteen writers into Norfolk middle and high schools on the first day of the Festival, encourages students to try their hands at writing and to attend this year’s readings. Cheers to AWP, to the Chrysler, to the participating Norfolk schools and to the volunteers who have initiated this innovative effort in our community. And cheers to the members of our audience, old and new!